This is a blog about vultures in Djibouti. Please feel free to comment. You can click on the images and they will open up larger in a new window and be easier to see. Also, you can translate the text by using the translate gadget on the right side of this blog.

Egyptian vultures in Djibouti - one year of tracking

In February 2020 we trapped seven adult Egyptian vultures at the Tadjoura abattoir, and fitted them with GPS loggers.  Of the seven, at least six seem to be still active in March 2021.  One may have died, but may still be alive, but outside the GSM network.  It may also have dropped its tag.  The birds displayed different patterns of behaviour.  Some appeared to settle into territories, others wandered widely, and at least one seemed to settle for rather short periods in areas, then move on (See maps below).  Their use of the abattoir at which they were captured varied:  some birds visited regularly, some irregularly, some rarely.

The ranging of the birds overlapped considerably (maps below), which is to be expected from scavenging birds, even though many birds were tied to territories. 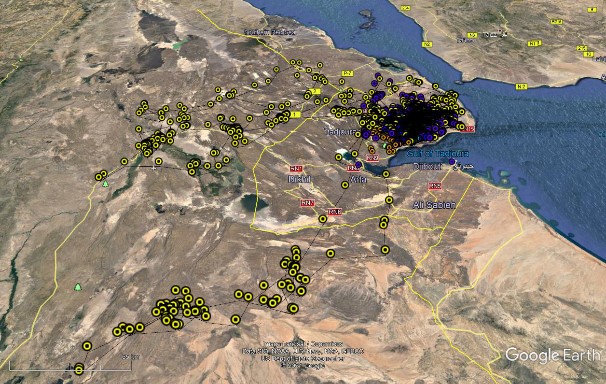 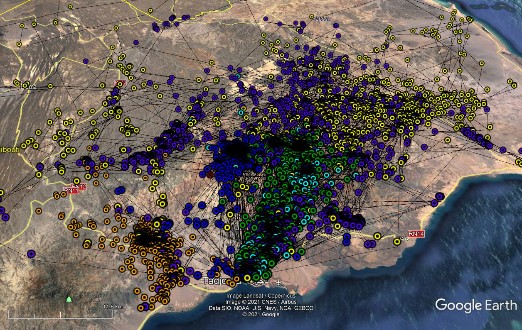 Movements during February 2020 - February 2021of 7 Egyptian vultures tagged in Djibouti, zoomed in on Tadjoura, where the vultures feed at the abattoir.
Most of the vultures were rather settled, suggesting that they were territory-holders, but one (Mabla) ranged quite widely, spending a considerable amount of time in Ethiopia.  In moving across this wider landscape, Mabla crossed through an area where a wind farm is being built, raisng the possibility that the wind farm may pose a risk to Egyptian vultures.  Even settled, apparent territory-holders sometimes ranged over much larger areas.  The maps below show two extremes of ranging behaviour. 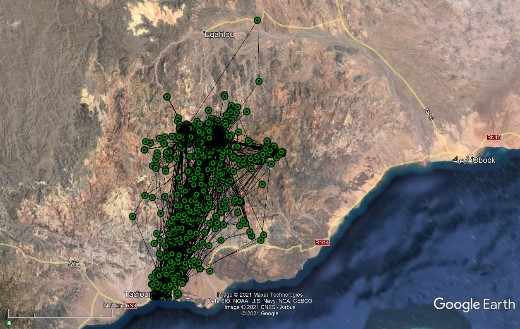 Movements of an adult Egyptian vulture (Goda) during February 2020 - February 2021.  Goda ranged primarily between its presumed territory and the abattoir at Tadjoura. 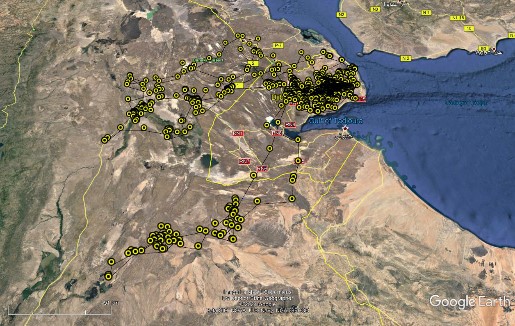 Movements of an adult Egyptian vulture (Mabla) during February 2020 - February 2021.  Mabla ranged over a very large area, including excursions lasting days or weeks into Ethiopia.

What has Doda done?

Below is a map of the movements of Doda (217) since it was fitted with a tag earlier this year.  You can see that it has made regular trips to Tadjoura, but that its home range was about 25 km NE of there. 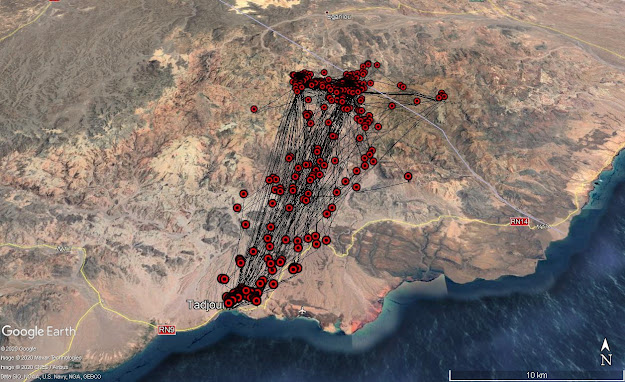 Movements of Doda during 2020.
If we zoom into the northern part of that home range, we can see that there appear to be two (east and west) clusters of locations.  These clusters are seperated by about 4-5 km. 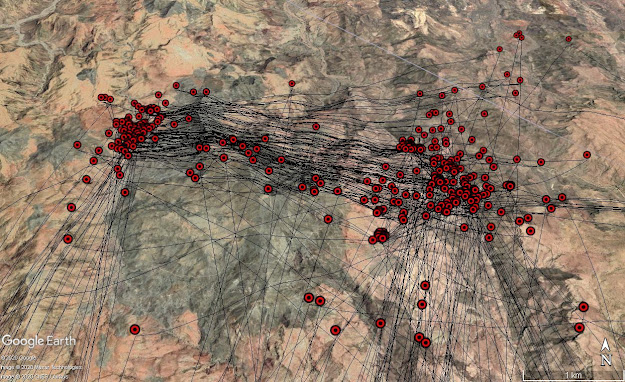 Clusters of activity for Doda.
If we zoom in further into parts of the western cluster we can see where they are spending a good proportion of their time - around human settlements.  Egyptian vultures are often commensal with humans, benefitting from the waste from humans and their domestic stock.  Humans benefit from the removal of waste that could promote disease. 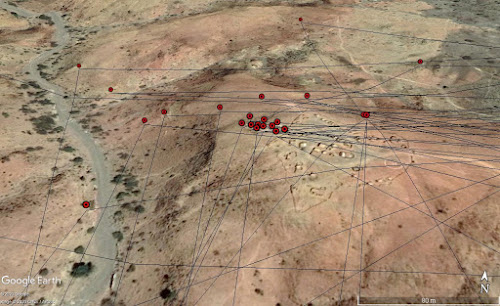 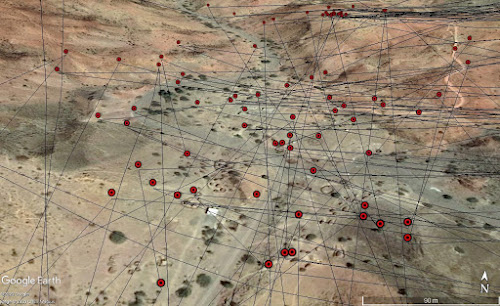 Doda's locations near human settlements.
Other news is that we have launced a new blog about eagles we are tracking from Kuwait  https://kuwaiteagles.blogspot.com/ We'll be posting on that blog often as we try to catch up with the backlog of information on that project.  We hope you will visit (and re-visit) it
Posted by Mike at 4:42 PM No comments:

We haven't posted much about the Egyptian vultures we are tracking in Djibouti lately.  There are a number of reasons for this.  First, the birds fitted with GSM tags (Mabla (216), Goda (217), Doda (218) and Loyada (219) are moving in and out of the GSM network, so we can have gaps.  We then wait, and wait, hoping they will turn up.  We last heard Mabla on 20 July, Goda on 22 July, Doda on 16 August, and Loyada on 22 August.  On those respective dates, all seemed to be doing fine. Below is a map of last locations of those birds, as of 26 August. 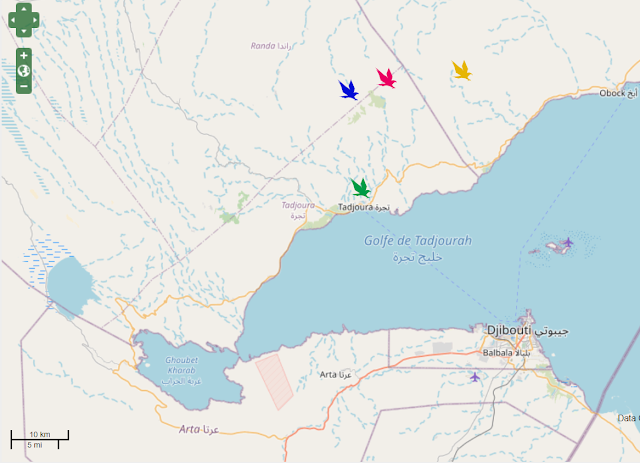 The second reason for not posting is that most of the birds appear to have held territories over the summer, and so did not make big movements.  Although their movements are interesting to us, they are quite repititious, and may not be interesting to everyone.  Below is a map of a vulture being tracked using the Argos system of satellites. These have the advantage of being able to upload data from anywhere, and are not dependent on the GSM network.  This map covers the entire tracking period.  The bird mostly stayed near its apparent territory, but made excursions out to Tadjoure, and one long excursion (for some unknown reason) to Eritrea on 3 May. 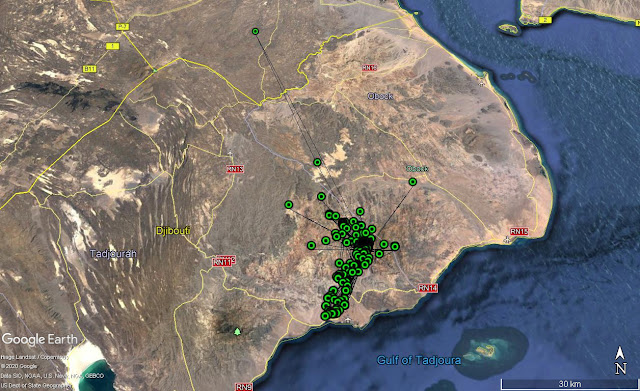 We see that we have not posted much about the vultures recently.  In the coming days we'll catch up, but for now, we wanted to share this really big news from Djibouti and the Horn of Africa.  The Somali Sengis (elephant shrew, Elephantulus revoilii) has been rediscoverd, and Djibouti Nature's Houssein Rayaleh was part of the team that did that.  Have a look at the article https://peerj.com/articles/9652/

Here are some of the news accounts:

As noted in an early post, Mabla (logger Id=216) appears to be a floating Egyptian vulture, and does not have a fixed territory.  Recently it has settled into the area around Hayu, Ethiopia.  It appears that Hayu is a small collection of buildings that service people and businesses moving between Ethiopia and Djibouti.  These places seem to be good for scavengers like Egyptian vultures.  Back in 2013, the vulture we were tracking (Assamo) spent time at a similar road side settlement near Ali Sabieh https://egyptianvulturedjibouti.blogspot.com/2013/06/

We are continuing to hear from the Egyptian vultures we tagged in Djibouti earlier this year.  As with the adult Egyptian vultures we tagged in Oman http://egyptianvultureoman.blogspot.com/, most of them appear to be territorial birds that move regularly between their territory and the abattoir at Tadjoure, where we caught them.  The territories are in cliff-rich terrain where they are probably nesting, at least some of them.  A few seem to be either unattached to a territory or less territorial because they may not be breeding this year.  Below are examples of a territorial bird (217, purple) and one that seems to be a "floating" bird (216, red).  Interestingly, the floating bird visited Ethiopia, returned to Djibouti (near Tadjoura), then headed again to Ethiopia and back to Tadjoura.  During that second Ethiopian sojourn it flew farther south, and was not so far from Adigala.  Look back at the maps of "Assamo" the Egyptian vulture we followed in 2013.
https://egyptianvulturedjibouti.blogspot.com/2013/08/adigala.html .  Assamo, also spent a lot of time in Adigala.  I wonder what is so attractive there.

In our previous post we showed maps of four territorial birds, and an apparently non-territorial bird.  The map below illustrates again how the behaviour of territorial birds differs from that of an apparently non-territorial "floating" bird.  At this time of year, territorial breeding vultures will be defending their territories against intruders, conducting courtship and producing eggs and young.  Of course, they still have to feed.  Floating birds don't have the burden (or benefit) of holding a territory, so they wander.  Those wanderings may include dwelling in some places for some limited amount of time, but they really are not tied to any locations. 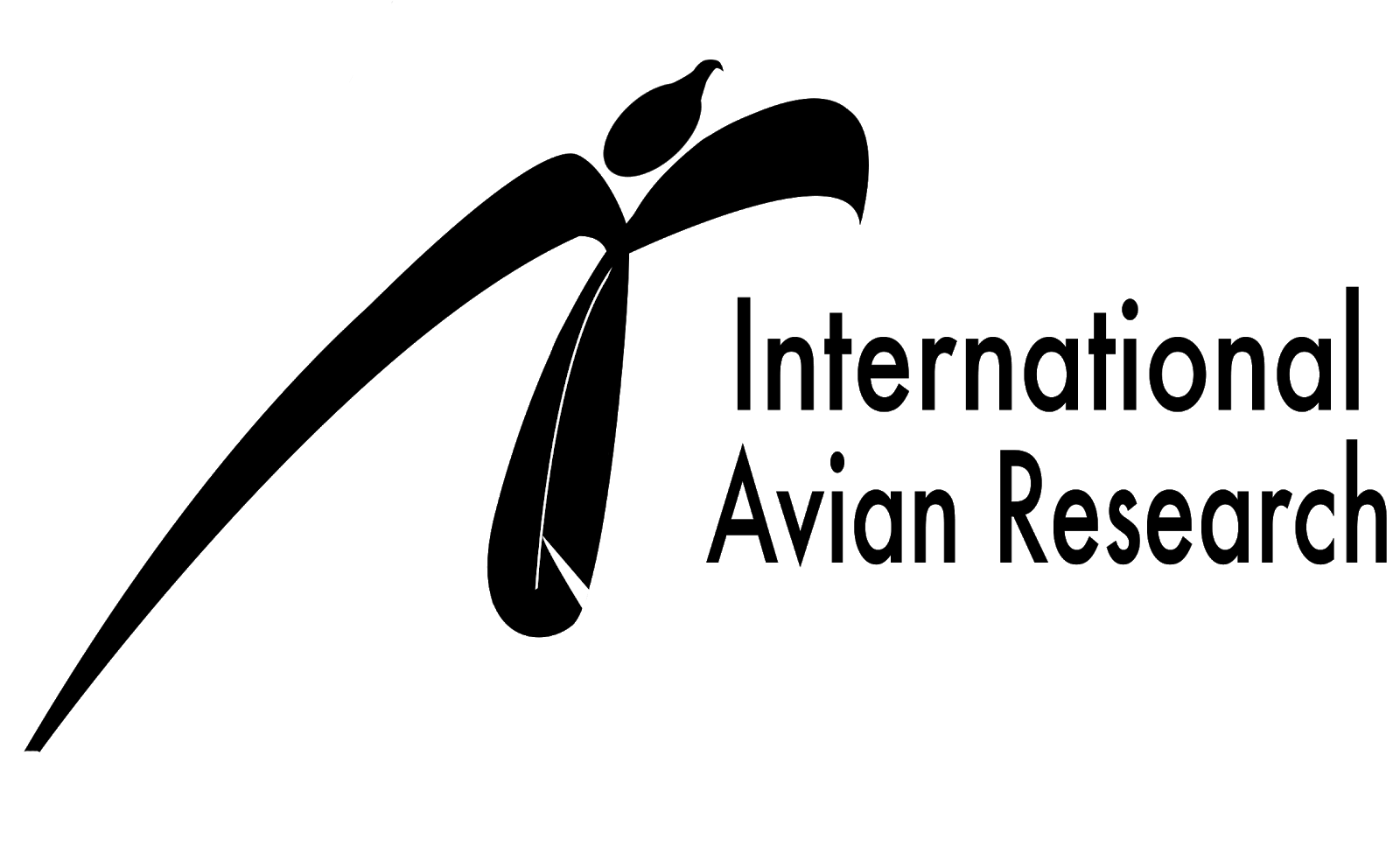